I was back in Turkey the other week, having breakfast on the Bosporus. Well it seemed the thing to do while I was there! Anyway, it was back to Turkey to discuss some matter that in one hundred years will seem of no consequence, but seemed worth a trip. What I notice in my travels around the world are sometimes we can learn the simplest of things from other countries, and this is what I picked up from Turkey this time:

Little lights that tell you if a parking bay is available: No longer do you have to drive around a parking garage looking for a free space. Red and green LED’s are placed on the ceiling of the garage in front of a parking spot. Sensors pick up if the space is occupied, and the LED shows red, if not its green. So all you have to do is look down the row of spaces looking for a green light. This seems to be coming to the UK and parts of the US, but the fact that Turkey had this was an eye opener for me. Brilliant!

Bus lanes with stations in the middle of the freeway: Now this is not a new idea, and certainly not unique to Turkey, but think how relatively inexpensive this is. When the freeways are built, the center part contains two portioned lanes for extended buses, the ones with the bendy bit in the middle. Stations are positioned along the way. Instead of building commuter rail, you have commuter busses acing like trains with no delays. Simple and effective. 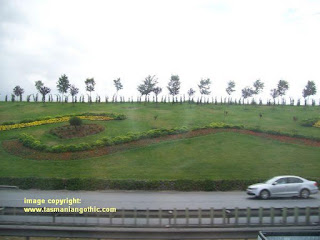 Landscaped freeways: Now this one was a surprise, although I did notice it last time I was here. And it may not seem like a Big Deal. However as we all know usually most freeways are concrete jungles. Not in Istanbul. Just about every freeway had amazing landscaping around the overpasses and other longer stretches. It may not seem like much, but it certainly made the many taxi rides seem calmer. And that’s saying a lot for those of you that know Turkey taxis drivers.