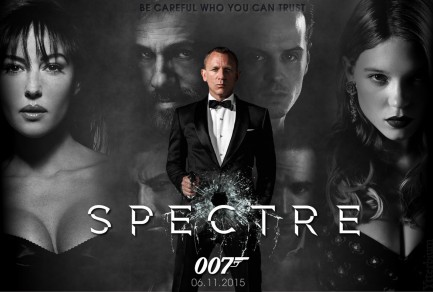 Here is a quick take on the new James Bond movie Spectre, which I was invited to see at a pre-release screening earlier this week. I won’t bother with the story except to say the movie pays homage to earlier Bond movies, all the way back to Dr No. As you may have read before, the opening ten minutes or so are really rather good, with one long scene unfolding in Mexico City during Day of The Dead celebrations. I am a huge Bond fan so I was able to pick up many of these cues.

Stirred, but not shaken

Judi Dench is replaced by Ralph Fiennes as M, but I miss Dench. There is a new Whitehall Mandarin called C, played by Andrew Scott of Sherlock fame. He played Professor Moriarty on that show as a hyper intelligent psycho.  I had high hopes for Christoph Waltz as the new world power grabbing mad arch villain, playing a larger than life version of the Andrew Scot version of Moriarty, but to me he underplayed it. Besides, having one individual bent on world domination was too much of a flashback for me. It worked when I was 12. Not now.

Regardless, the movie is fun, but way way too long at 148 minutes. I love Danial Craig as Bond, but in this one he doesn’t play the ruthless killer enough. Craig always looks to me like a boxer in a tux. Someone you might under estimate in a flight and lose rather badly to. Its as if the film makers wanted to play it too safe after the amazing success of Skyfall. Better to let Bond be Bond in my opinion. A bit of a thug. Overall then, it plods along in places given the length, and really it seemed to me more of a collection of vignettes sewn together rather than one coherent movie. Would I see it again? No. Will I go to the next Bond movie… of course.