ep 05: Voting for Trump is a Big Middle Finger 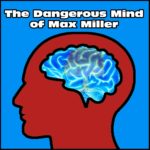 In this episode of the Dangerous Mind of Max Miller Podcast max takes a moment to talk about the recent overwhelming support of Trump in the elections as a backlash to the perceived failures of the Obama administration as well as how a vote for Trump has become the equivalent of a middle finger to the status quo.